This summer, whether due to the global pandemic or just because I have been out and about at the right time, the sound of birdsong has played a big part in my (working) life. Almost everywhere I have been, down in the Chalke Valley or up on the Chase, skylarks, yellowhammers and particularly corn buntings have been singing away – a soundtrack to my journeying. 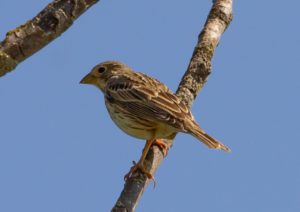 I began to wonder about the bird that was keeping me company – it’s a noisy but not very obvious, brown, not very large (sparrow-sized) bird singing from fences and bushes with what the books describe as a ‘metallic jangling song, like a bunch of (small) keys being rattled together’.  My research tells me it is taxonomically in a genus of its own – there is nothing else quite like it although it is in the same family as the yellow hammer (and the other buntings).

What about the name? Here is a bird, a native and resident of the British Isles (so has been around for a while) named after corn, now the common name for maize, which originated from Mexico and was unknown in Europe before the 16th century.

Corn or grain are linked in meaning.  A grain of sand or a grain of salt, a small nugget or particle; peppercorns, corned beef – terms applied to something which can be or have been ground into small particles.  Similar(ish) words in Latin (granum), old German (kurnam) and English (kernel) refer to the seeds or particles of seeds of cereals such as wheat or barley (or oats in Scotland) – whichever cereal or grain became the leading product of a region was known as corn.  Produced in the fields and ground in the mills, ‘corn’ would have been the staple of human and consequently other life. 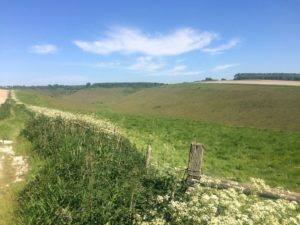 Adult corn buntings eat mostly seeds, although their chicks are fed spiders and insects, they nest on the ground in long grass at field edges and so would have been around the farm workers in the fields at all times and would likely have picked up the name from association.

Prescombe Down, a National Nature Reserve and good place to listen to Corn Buntings

And bunting?  The name for triangular flags used in street parties etc?

Bunting was originally a specific type of lightweight worsted wool fabric generically known as tammy, manufactured from the turn of the 17th century, and used for making ribbons and flags, including signal flags for the Royal Navy.  (Apparently the officer responsible for raising signals using flags is known as ‘bunts’).

The material was similar to the cloth used to sift grain and meal, and so back to corn!

Amber is not the best colour

However, there is a bit of a down side to all this – the corn bunting is on the amber list of ‘Birds of Conservation Concern’.  The BoCC is compiled from records taken by observers and takes into account the decline in numbers of breeding birds over long periods of time (25 year increments) and applies a traffic light system for conservation action.  Birds on the red list are those that have suffered severe (at least 50%) decline in UK breeding population over last 25 years or at least 50% reduction in breeding range in the same time; the amber list 25% reduction and green are stable (there is a little bit more to it than that but in a nut shell…).

In general, arable wildlife has suffered badly from pesticides and fertilisers, a move to autumn-sown cereals, and the loss of unkempt field corners and mixed arable and livestock farms. In the past, farms produced wildlife in abundance, as a by-product of farming operations, making farmland one of the most biodiverse habitats.  The economic pressures encouraging the intensification of agriculture over the last 60+ years have largely pushed out arable weeds, birds and other wildlife, and with the range of chemicals now available, farmers have the ability to remove almost all wild animals and plants.

Wildlife flower margins and set-aside land have allowed wildlife to persist where landowners have chosen to make space for them, generally with financial encouragement through agri-environment schemes.  Measures such as ‘beetle banks’, ‘skylark plots’ and unsprayed conservation headlands have delayed the declines a little, but haven’t been enough to reverse the trends, and the challenge of creating space for arable wildlife on land owned by a diversity of commercial farmers remains.

Corn Buntings are rallying slightly and the fact that so many are singing on Cranborne Chase is down to the awareness of ‘our’ local farmers and how accommodating they are in their farming practice. 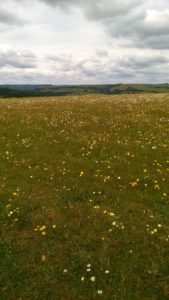 Pincombe Down – fabulous wild flower meadow and hoochin’ with skylarks!

Another bunting, the sparrow-suited (but sleeker) reed bunting was a delight to watch a few weeks ago, up to three  birds snapping at each tasty mayfly, oblivious of swimming human just below.