The South Wiltshire Greater Horseshoe Bat Project (SWGHBP) was launched in October 2020 to focus conservation action upon greater horseshoe bats in South Wiltshire, as well as other rare bats 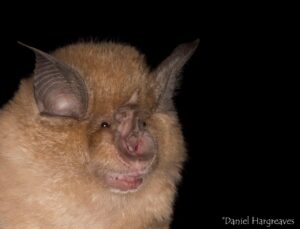 The Barbastelle bat is widespread in South Wiltshire, and Bechstein’s bats have been found at a number of sites too.

Further information on the aims and objectives of the project may be found on the website here. In the first year of the project, a considerable volume of work has been achieved, which I’ll summarise as follows, as briefly as I can…

The precise locations of these roosting sites are not published in the public domain, in order to protect these sites and prevent disturbance of the bats using them.

Thanks to equipment purchased by Wiltshire Bat Group, Defence Infrastructure Organisation (DIO) and Chilmark Estates/Natural England, we initiated large scale detector surveys in south Wiltshire, some of which was linked to the programme of dung beetle surveys funded by DIO and Wessex Water.

Readers may also be interested in publication of an article in the MOD’s Sanctuary magazine, in 2020 (Number 49), in relation to Barbastelle bats on Salisbury Plain.

A series of additional sites were also surveyed, thanks to some funding from Wessex Water, as part of additional dung beetle surveys. Simon Smart also conducted similar surveys with his farmer groups in the Chalke Valley and Pewsey Downs.

Clearly this is a phenomenal volume of data, and so this work was greatly supported by the project’s subscription to the BTO Acoustic Pipeline, which not only helps with the collection and collation of data from multiple sources (because each surveyor was able to immediately upload their data), but the pipeline employs advanced bat classifiers and outputs detailed analyses. These data were checked and verified to ensure that identifications are correct prior to reporting and prior to sharing with partners such as the local environmental records centre. Crudely, this amounts to over 700,000 sound files. In due course, a more detailed output will be shared. I’m grateful to Stuart Newson, BTO for all his help and advice this year.

We wished to assess dung beetle assemblage in these locations, but hit on the first stumbling block – few, if any, coordinated dung beetle surveys have been undertaken in Wiltshire, so it would be hard to assess this without some sort of baseline survey to compare to. So, we embarked upon dung beetle surveys on Salisbury Plain training area (thanks to a grant from DIO, who also wished to further understand the health of dung beetles on the chalk grassland of the training estate) and in doing so recorded foraging greater horseshoe bats on the northern edge of the Plain (not so far from Bratton and Easterton). Wessex Water supported this work further with a grant to survey additional areas, enabling us to survey pastures in the Chalke Valley, Nadder Valley, Avon valley and the Stonehenge World Heritage site. We’re scratching the surface but generating some fascinating data.

Wessex Water featured us in their Winter 2021 customer magazine, joining us when we visited meadows in the Avon valley near Downton.

Fieldwork was undertaken by Simon Smart, Pete Thompson and I, with Marc Arbuckle (county recorder for Coleoptera in Wiltshire) delivering the identification work. This was a fairly large undertaking with some logistics to deal with; ranging from surveying on a military training estate (warm thanks to the MOD ecologists and the MOD training safety officers who facilitated our work, kept us safe and showed such interest); working alongside some amazing graziers and some brilliant livestock including some rather lively bulls; to dealing with an awful lot of cow poo! In particular, Marc had the added challenge of microscopic identification of a few thousand dung beetles, which is a very challenging group of beetles. It’s been a big team effort – thank you everyone.

The bat and dung beetle survey findings are too much to present here in a meaningful way, so in coming weeks and months we’ll share these findings in a series of blogs. So, watch this space!

Another important aspect of our work with dung beetles, is engaging with the farming community to promote the importance of dung beetles in soil health, nutrient cycling, carbon sequestration, and crucially their role in management of livestock endo-parasites. Many of the veterinary products used to combat “worms” in livestock have long-lasting affects in the environment once excreted in dung.

The farming community is acutely aware of this, and a number of projects and initiatives are underway to promote alternate means to treat worms. Dung beetles are one of the first species to suffer from veterinary anthelmintics in the environment, therefore with knock-on effect to the wider food chain (including bats).

The project has therefore been working with Dung Beetles for Farmers to coordinate and deliver online training events within the project area promoting dung beetles, and alternative ways to manage pastures and “worms” in livestock. The farming community is widely supportive of this, and the training was delivered by Max Anderson and Sally-Anne Spence to the Chalke Valley Farm Cluster and the Nadder Valley Farmer Group (some of whose members graze in close proximity to the bat SSSIs). Many of you will remember Max’s presentation at the Devon Greater Horseshoe Bat Project Conference in 2020 on this same topic, as Max’s PhD is also supervised by Fiona Mathews.

Those of you interested in seeing this training may be interested in Dung Beetles for Farmers’ presentation at the Oxford Real Farming Conference in January 2022, which broadly covered the same discussion points.

Finally, we promised we’d do some people engagement as part of this project, and we were warmly welcomed at two events with the Nadder Valley Farmer Group, a walk with Tisbury & District Natural History Society (with warm thanks to Jenny Bennett & Mariko Whyte for assisting with these three events), as well as an evening talk with the Avon Valley Farmer group hosted by GWCT, and two guided walks and an online evening talk for Wiltshire Wildlife Trust, linked to their Heritage Lottery-funded project at Coombe Bissett Down (warmly hosted by Mel Evans). Around 80 people were engaged in these events.

In year one we’ve achieved far more than I imagined, and that is largely thanks to the support and interest of a large community of people, in particular, Simon Smart, Margaret Feneley, Peter Shallcross, and many more. The number of landowners and farmers involved in this work is extensive.

In Spring 2022, we were fortunate to secure additional funding from the Defra-funded Farming in Protected Landscapes in Cranborne Chase AONB which has enabled the project to develop some materials and information to further the aims of the project. In addition, further funds have been secured form Defence Infrastructure Organisation to build upon the 2021 surveys.

This project, and its successes, are the result of collaboration between many organisations, landowners, farmers and volunteers. The funders and supporting organisations are warmly thanked, including Black Sheep Countryside Management, Defence Infrastructure Organisation, Natural England, Wessex Water, Cranborne Chase AONB, Wiltshire Bat Group, and two landowners who wish to remain anonymous, Nadder Valley Farmer Group, Tisbury & District Natural History Society, and National Trust. Many landowners facilitated access for surveys of bats and dung beetles, and many graziers provided access to livestock for dung beetle surveys. The Training Safety Officers of Salisbury Plain military training area are warmly thanked for assisting with surveys and for keeping us safe.

This update was produced with support from a Farming in a Protected Landscape grant, Defra funding administered by Cranborne Chase AONB.

Surveyors and volunteers involved in this project include Simon Smart, Peter Thompson, Jenny Bennett and Lisa Wade. Photographer, Daniel Hargreaves, is thanked for his images to promote bat conservation.