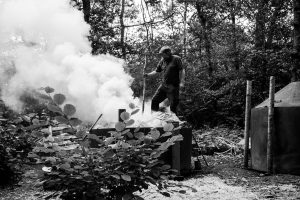 This month I had the privilege, along with other artists, to be invited to join a charcoal burn; to witness the production of the material and capture this fascinating and traditional process through our drawings.

The Dorset Coppice Group, Pete Etheridge and Pete Jameson (Trustee for the Cranborne Chase Landscape Trust) led the preparations. They explained the history and craftmanship as well as the part charcoal burning plays in woodland management. 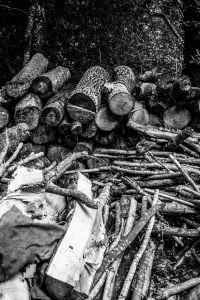 He was selected to become Bishop of Comana, maybe partly as a joke, but soon they discovered under his rags he was a learned man living humble life close to God.

Charcoal itself is tied up with the history of metalworking and is used by blacksmiths in forges to smelt metals. Charcoal burns much hotter than wood as the water and air has been removed by the first burn.

Traditionally charcoal also made use of the less valuable lop and top from sawlog trees (larger diameter trunk which is more useful for different timber purposes) In more modern days it is a useful way to use overstood coppice when restoring it to rotation (normally 7-8 years). 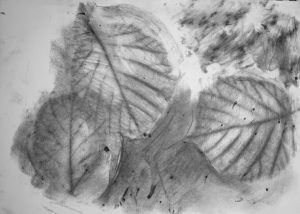 Additionally, some years if a hurdle maker has a bumper crop, then the extra would be grown on to 14 years and then cut as 14-year-old is a good size for charcoal.

Charcoal as a drawing medium is also as old as time, with the first known cave paintings from 28,000 years ago made using burnt charcoal sticks.  Later it was mostly used for preparatory sketches, such as wall frescos or paintings in the Renaissance period.  Only when methods to fix this flaky smudgy material were devised has its use become more widely accessible as an artform in its own right. 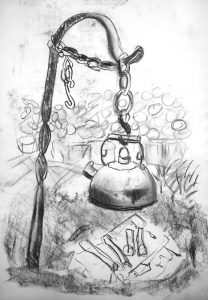 Charcoal, in drawing, produces soft velvety quality that complements with the texture of the paper surface.

It can be blended to create tones of light and shade as well as applied with stronger linear strokes to produce confident solid shapes and higher contrast.  You can also remove charcoal shading, in reverse, to reveal the white of the paper which is particularly useful to create highlights on water or sunlit trees.

I use a tool that is made from a highly compressed roll of paper in the shape of a pointed pencil.

Traditionally you can also use bread as a charcoal eraser! 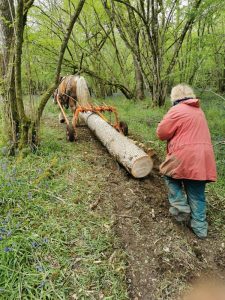 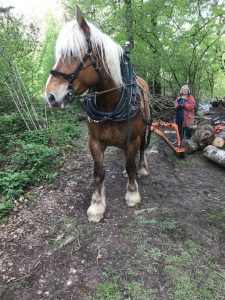 The Day of the Burn

We arrive early in the morning at the kiln site. Pete Jameson works an area of woodland on the Cranborne Estate but because of public access issues at this time the burn was arranged at Bonslea Woods, home to the Dorset Coppice Group.

It was particularly interesting for me to visit this site as my father was born within a mile of this woodland.

I recall from childhood visiting my grandfather who was gamekeeper and exploring the area seeing hurdle makers coppicing these woods. 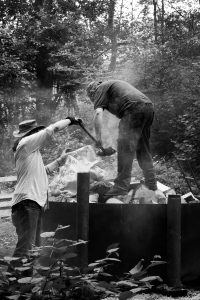 My father and his sisters also describe an Italian charcoal maker who lived in the woods during early 1960s:

“I remember the Italian, very reclusive and spoke no English. His kilns were massive and burned continuously, we often saw flames throughout the night.  I used to communicate through signs and hand gestures. We used to get his shopping so that he stayed in the woods. He would have been out of place in town with his charred clothes and fire blacked face.!”

Returning to the Bonslea kiln; this had already been stacked ready for firing.  The way timbers had been arranged meant the kiln is ventilated from below and allows airflow to the centre.  The process had taken some amount of time in careful preparation.

It all started earlier in Spring of this year when horses had dragged logs through the forest to the kiln site.  The use of horses prevented the woodland floor from being churned up by heavy machinery. 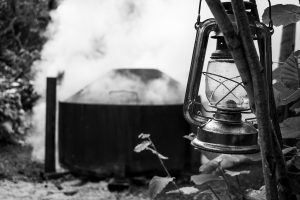 A small fire had been lit beside the kiln and the hot embers from this fire were placed in the centre of the kiln stack.

Also added to the top of the stack were some metal canisters containing buff willow sticks (willow stripped of its bark) plus some lengths of grape vine.  These will make up a new batch of drawing charcoal to be used by artists.    Once the fire started to take hold the lid was placed on top and earth used to seal any gaps.

Despite predicted storms (which thankfully didn’t arrive) the group of artists from across the region spent the day drawing and sketching in the woodlands.  The burn went on well into the early hours of the following day before being shut down to cool. 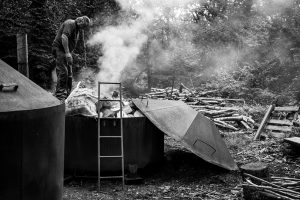 The earth was scraped back and the lid removed revealing the charcoal inside.  The small metal canisters were opened and contained fresh drawing charcoal sticks to be used for future artwork.  Using a metal gridded chute, the pieces were shovelled out of the kiln and then sorted by hand into different grades for various purposes from blacksmithing, horticulture to barbecues.

An exhibition of artworks is planned for the late Autumn in the classroom at Bonslea Woods. 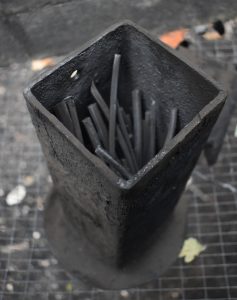 Peter Jameson and Lesley Self are both Trustees for the Cranborne Chase Landscape Trust.

Peter’s association with the Cranborne Chase dates back to the mid-1990s when he developed a part time charcoal production venture, initially with one charcoal ring kiln on 30 acres of undermanaged woodland on the Hampshire/Dorset border.  Peter is a member and past Chair of Hampshire Coppice Craftsmans’ Group, a board member of Dorset Coppice Group, and the Dorset local contact for the Association of Pole & Lathe tuners.

Lesley works for ArtCare, a charitable arts-in-health project at Salisbury District Hospital, as curator and exhibition organiser for the art and historic archives collection. Lesley is also the Creative Director of Hampshire Open Studios.  Lesley volunteers with Dorset Wildlife Trust and UK Butterfly Monitoring Scheme (UKBMS) and enjoys spending free time walking and photographing the local landscape which is often the inspiration for her own artwork.

The Cranborne Chase Landscape Trust’s mission is to inspire everyone with an interest in the Cranborne Chase Area of Outstanding Natural Beauty (AONB) to get involved in the conservation and enhancement of these special landscapes.  http://www.cranbornechaselt.org.uk/

Black and white photos: Lesley Self