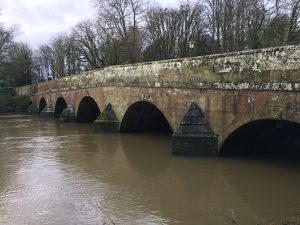 Many months ago (actually last year) when it was consistently warm and sunny, I walked around Blandford Camp. There are public rights of way all the way around, if not through, the Camp and it is a very interesting wander. Unexpectedly so in many ways.  In long views across the AONBs (we can see both ‘our’ Cranborne Chase and the Dorset AONB to the SW from there), nature forcing her flowery way through crumbling tarmac, or in the birdsong overhead and around. There’s also the odd glimpse of something military which we probably shouldn’t be glimpsing. 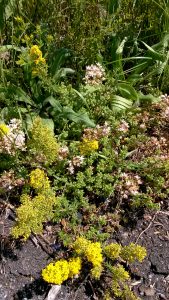 I started wondering why Blandford Camp was there and its links to Blandford itself, some 3 miles away to the west.  It’s here that I will start this historical ramble, with the help of Wikipedia and the excellent Dorset Historic Towns Project (by Dorset Council).

‘Blaneford’ appears in the Domesday Book, and ‘Blaen-y-ford‘ (or Blaen-y-portage) in Anglo Saxon, which probably means ‘ford where ‘blay’ are found‘.

Note: The Blay, Bleak, or Gudgeon, is a small lightweight but powerful fish (with the glamorous Latin name of Gobio gobio) reaching approx. 100–125mm in length and weighing in at about 85gms. Very sleek, this silvery blue fish is perfectly shaped to ensure that it can easily combat powerful flowing water whilst bottom feeding. The head is very aerodynamic, the mouth below, while the body tapers away steadily; it is edible, should you so wish.

The ford, some 50m east of the present Blandford Bridge, lies at the boundary of two ‘hundreds’ (Saxon land divisions) and may have always been open ground and potentially a traditional place of exchange. By the 13th century, this had evolved into a market town with a livestock market serving the nearby Blackmore Vale and its many dairy farms. The ‘pons de Blaneford’ was recorded in 1268.

At the start of the 14th century, Blandford returned two members of parliament and was also known as Cheping Blandford (a cheping is a place where goods are bought and sold). The Latin word Forum, meaning market, was first recorded in 1540.

It became a Borough in 1605, with its own Mayor and was the seat for county elections.

Blandford Forum was one of several lace-making centres in the county. Daniel Defoe in his A tour thro’ the whole island of Great Britain (1724–1727) stated that lace made in the town was “the finest bonelace in England… I think I never saw better in Flanders, France or Italy”.

The ‘Georgian Period,’ commonly placed between 1714 and 1837, seems pivotal for the town. The ‘Great Fire of Blandford’ and subsequent rebuild in the style of the time (albeit slightly less flamboyant than some contemporary architecture); the continued importance of the wool and livestock markets; the coming of fast transport links during the ‘Road Boom’ of the mid eighteenth century, and its relative position to the wealthy estates and families of the Counties of Dorset and Wiltshire, meant that Blandford Forum was well suited to the age.

No account of Blandford can be considered complete without mention of the Bastard Brothers and their contribution to the town’s rebuilding.
Almost all of Blandford’s buildings were destroyed on 4 June 1731 by the “Great Fire”.

This was was the last of several serious fires that occurred in the 16th, 17th, and 18th centuries. The fire began in a tallow chandler’s workshop, on a site that became The King’s Arms public house in White Cliff Mill Street. Within a few hours, almost 90% of the town’s fabric had gone. All fire-fighting equipment had been lost to the fire and the church’s lead roof had melted. Even properties west of the river in Blandford St Mary and Bryanston were burned, though much of East Street survived. An Act of Parliament was introduced that stated that rebuilding work must be in brick and tile (thatch obviously a contributory factor in the rapid spread of the fire) and should begin within four years. With assistance from the rest of the country—including £1,000 given by George II—the town was rebuilt over the next ten years to the designs of local architects and master builders John and William Bastard.

After the post-fire reconstruction Blandford remained a thriving market town. Wool spinning, button making, gloving and a foundry occupied the 4000 or so inhabitants of the Borough, and the malting, brewing and hostelry trades expanded.

The turnpike road between Salisbury and Dorchester was made in 1756 and passed through the town. As did the Poole to Shaftesbury route. The arrival of the coaching era increased the town’s prosperity, although the built fabric of the town changed little until the first half of the 19th century.

The Victorian and Edwardian period was one of rapid expansion on a scale unprecedented in Blandford up to that point. Rail transport arrived in Blandford in the 1860s, skirting the eastern side of the then urban extent; changing the town’s layout considerably and creating what is known in the Historic Towns Report as the Blandford Historic Urban Character Area 4 ‘The Railway Suburb’. Urban expansion in the 20th, and indeed 21st, centuries continues apace with the population now at least three times that of the Georgian era.

Blandford’s economic mainstay of weekly wool and livestock markets continued until about 1930 at a site behind the Crown Hotel. After this period the cattle trade seems to have been lost to Sturminster Newton and Shaftesbury markets. The seasonal sheep fairs continued until 1939, changes in animal husbandry and a reduction in sheep numbers in the county accounting for the closure. Saturday sheep markets continued on Sheep Market Hill in front of what is now the Post Office until as recently as 1977!

The Camp – the original focus of this ramble – had begun its influence long before the sheep left and its evolution alongside that of the town is worthy of an account of its own.