What does this man with his long luxuriant wig and “sparkish garb” have to do with the Ebble Valley?

His name is John Aubrey and he was born in North Wiltshire in 1626.  He inherited and eventually lost, through debt and mismanagement, the tenancy of a large farm in Broadchalke.  The same friend that mocked his “sparkish garb” also accused him of being “maggoty-headed” and “sometimes little better than crazed”, but on the plus side he had lots of other friends.

John Aubrey’s other friends and associates included Thomas Hobbes and John Locke, Edmund Halley, John Milton, Sir Isaac Newton, Christopher Wren, Andrew Marvell, Sir Thomas Brown, John Dryden, the Earls of Pembroke and Shaftesbury, and the brilliant experimentalist Robert Hooke (who was especially helpful when Aubrey was dodging the bailiffs and creditors).  He also knew astrologers, cheesemakers, watchmakers, gravediggers and dancing masters… the list goes on.  John Aubrey was a collector of people, a founding member of the Royal Society at a time of the birth of science and he was in the thick of it.  Broadchalke, unfortunately, was not the thick of it. Natural Philosophy had sparked off in Oxford and then London but his burdensome responsibilities kept drawing him back to South Wiltshire with his quill a veritable blur as he tried to maintain a connection with this new electricity whilst being entirely dependent upon the postal system of 350 years ago.

John Aubrey is especially well known for the books that he never published.  He only published one small book in his lifetime but in the 323 years since his death he has very justly become the father of biography with some of the finest English prose ever written in Brief Lives, and with Monumenta Britannica he is firmly established as the father of field archaeology.  Common to both books is a fervour for collecting information on so many things: people’s characters, conversation, the sound of their voice and how they walked, how they kept their hair, scandals, what diseases they had, stone circles, ditches, pits and mounds, burial urns, legends and superstitions and anything that might not have appeared to be important to another living soul at the time but all recorded before it slipped away forever.

From a youth he cast his gathering net back towards the end of the sixteenth century, capturing the memories of grandparents and elders before they died and he wrote it all down.  There was no precedent for this; it was an innate response in a time of change and great upheaval.  Cromwell, the English Civil War, the Interregnum, the Restoration all came and went with Aubrey remaining as neutral as possible by some very impressive fence-sitting but all the while collecting and preserving.  John Aubrey gathered and generously shared information and he did not stop until he died.  He also saw to it that all of his documents were preserved securely in the newly established Ashmolean Museum in Oxford.

Remarkably, the first complete and unedited version of Brief Lives came out in 2015 (there were earlier attempts and a relatively comprehensive but censored edition was produced in 1898), whilst Monumenta Britannica was published for the very first time in 1982.  As well as looking back, Aubrey was at the intellectual coal face of new scientific, engineering, astronomical, medical and mathematical developments that were to eventually shape Britain as a world power in the succeeding centuries, culminating in the Industrial Revolution.  In fact, for all his love of things past, he dedicated himself to the future, a future beyond his own lifetime when all his efforts, connections and energies would become absolutely invaluable.

However the Aubrey book that has fascinated me most of all, for the last 20 years or so, is his Natural History of Wiltshire – first published in 1847 and reprinted in 1969.  He employed the same broad gathering net, and the chapter headings read: Air, Springs Medicinal, Rivers, Soils, Minerals and Fossils, Stones, Beasts, Fishes, Birds, Insects, Men and Women, The Downes, Arts Liberal and Mechanical… and so on.  Compiled between 1656 and 1691 it is an extraordinarily rich trove of information, a lot of it relating to South Wiltshire and his time in Broadchalke.  For some years I have been researching odd details and paragraphs from this book which have led to some fascinating discoveries, of which more at a later date.

Finally, I have long been eyeing up John Aubrey to write about him or dramatize aspects of his life in South Wiltshire.  There is an actor who is the spit of Aubrey and who would be perfect to play the character in his middle years.  I’ve seen him in a couple of productions on television and I’m keeping him up my sleeve to play a part as yet unwritten about a man in a long and luxuriant wig.  But for now, when I should be at Glastonbury Festival with my family and grandchildren this weekend, I am about to do all the cobwebbing throughout the house, so it goes.

Nick Cowen maintained the public rights of way in South Wiltshire for 30 years until he retired last summer.  He is the author of five books with a sixth out very shortly (see below), all published by Hobnob Press.  He is also a member of the Kings of Lounge, an acoustic instrumental group. The Kings of Lounge Guitar Duo

The fictional tours of Henry Chalk in 1807-8, presented in the style of the once very popular genre the Domestic Travelogue.  With danger snapping at his heels, our young hero stumbles upon the founding fathers of archaeology who are intent on opening every prominent burial mound in the Stonehenge landscape.  Love and mystery entwine the young walker like an ever-tightening creeper as he explores the sunken lanes and glaring chalklands throughout South Wiltshire.  As the young hero puts pen to paper to record his adventures, his own story unfolds, whilst a shocking denouement awaits.  First published by Hobnob between 2005 and 2013 in three parts, the trilogy is now brought together in a single volume, with additional drawings by the author, a new map and biographies and explanations of the real characters encountered by our hero.  It will be available from booksellers from July 2020. 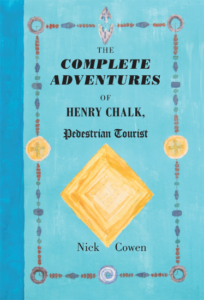