Following initial COVID-19 restrictions, the Cranborne Chase AONB ELMS Test held a virtual workshop in April 2020 for local farmers. Presentations about the Test’s aims were emailed to 45 farmers, who originally signed up to attend the physical workshops, with an associated online questionnaire to capture thoughts on current and future Agri-environment scheme mechanisms. We received a 62% response rate to the questionnaire, providing vital information to report to Defra (Government Department for Environment, Food & Rural Affairs) and feed into the design of the new Environmental Land Management Scheme, which is to replace Countryside Stewardship and the Basic Payment Scheme.

The full report with graphs and figures showing survey results can be downloaded here:

What the farmers said…

‘Future schemes must provide rewards for businesses that deliver real improvements, not those that just follow prescriptions. That reward must extend further to those that, by better management, are able to deliver more.’

‘It would be sensible to allow changes to schemes as required, especially if they help the environment. Things change on farms and so it would be helpful to work with the Countryside Stewardship Scheme rather than being constrained by it.’ 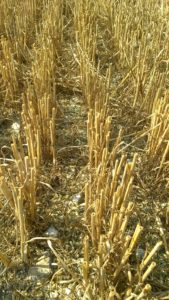 Of the responses received, 86% of participants are currently within the Countryside Stewardship Scheme. Mid-tier stewardship was the most popular, with over half of respondents participating.

Motivation for joining an Agri-environment scheme was frequently linked to increasing farm income and allowing for improvements to areas such as fencing and hedgerows. Natural progression incentivised movement from one scheme to another but many of the participants expressed desire to do something positive for the environment: ‘[It] feels the correct thing to do, a passion to improve’ and ‘…doing something to improve the countryside that we live and work in’.

The Agri-environment scheme application process was not heavily criticised, however a high number of participants who were in a scheme were unsatisfied with the payment process, stating late payments and its bureaucratic nature as a block on innovation.

Despite some areas of dissatisfaction, many participating farmers have been content with the overall outcome of the scheme: ‘Results of my mid-tier scheme have been pleasing in terms of biodiversity…’ or ‘As long as you have a project officer who’s accessible, the land management works well’. 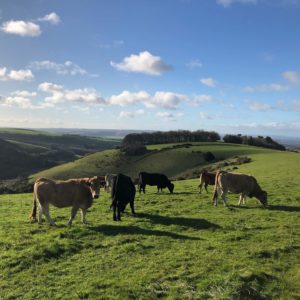 For the participating farmers, food production was the principal public good identified, citing the desire for production to be ‘sustainable’, ‘healthy’, ‘natural’ and ‘local’.

Linked to producing quality food, was the desire to provide public goods such as healthy soils, clean air and water, wildlife conservation and climate regulation.

All participants stated they would be willing to manage for wildlife through soil management, 82% to plant trees for carbon capture, 60-75% willing to reduce nitrogen and pesticide applications, and over half were willing to increase public access and provide educational farm visits.

A high proportion of farmers (71%) responded that they currently hold data about public goods on their farm, including various surveys, data on cropping/tillage regimes, and mapping. Soil analysis surveys were most regularly conducted, as well as farmland bird surveys, with only approximately one-third carrying out water quality and butterfly surveys.

Self-monitoring of public goods was viewed as a realistic option by 61% of respondents, 29% stating they could dedicate 5 hours/month to monitoring and a similar 23% stating one day/month. The most popular surveys included pollinator (88%) and earthworm surveys (94%), with pond survey, wader surveys, and reptile surveys opted for by less. Reasons for not conducting self-monitoring ranged from limited expertise (82%), lack of time (64%) and farm area being too large to cover consistently (37%).

The majority of participants were strongly or somewhat in favour of working across farm boundaries, with comments including, ‘Nature doesn’t agree with the artificial boundary the farm creates’ and recognition of the ‘…advantage of scale in making the link with the landscape for the benefit of the environment’.

The incentive to work across boundaries overwhelmingly cited financial payments, with farmers stating the importance of funding trainers and facilitators and reducing bureaucracy in the individual farm stewardship applications.

Finally, some key points were expressed in relation to the design of the new Environmental Land Management Scheme, highlighting the need for simplification, engagement, and ease of payments. It was also felt that the scheme should be incentivised more appropriately, with the following recommendations from farmers (see Figure 4 in attached pdf).

Responses from the farmers showed that there is a drive to do more for wildlife should appropriate training and support be more widely available. Less top-down bureaucracy was overwhelmingly recommended, which could be hindering innovation and stifling effective forms of wildlife management.

Overall, the online questionnaire captured the farmer’s sentiments in relation to the current Agri-environment scheme and provided a gauge of interest in the future scheme’s ‘public money for public goods’ concept.

Following the virtual workshop, we began working with six enthusiastic farmers for assessing public goods on their holdings and are currently in the process of co-designing Land Management Plans. Responses from the questionnaire offered snapshots of available data on public goods for contributing to their plans and provided leads for further data investigations.

Next, the Test team will be reporting to Defra (Government Department for Environment, Food & Rural Affairs) about the various tools and resources currently available to assess public goods, as well as the expanding market to trade them as natural capital.